What does Playhouse 2 mean to me? 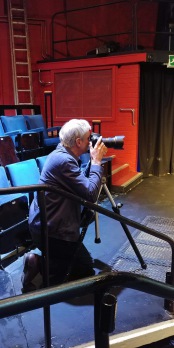 I first heard about Playhouse 2 in late 1987 when my friend, Steve Bennett, who lived locally at the time, wanted to get into acting so I went along to check it out and also to give him some moral support.

We were welcomed with open arms by Barrie Cottam and immediately started working on the stage-set for their forthcoming production ‘The Torch Bearers’.

I’ve always been into sound and music (not acting!) and Barrie, in the pub after working on the set, offered me the sound technician job which I ended up doing until 1989 when I moved to Kendal. Steve did his first play ‘The Dining Room’ a few months later so we were all happy! Steve still acts in plays and directs too.

Very quickly, we realised that the society is like an extended family, everyone is very friendly and supportive, there are no prima donnas... well, not many!

The quality of the productions is also amazing. All the plays are directed with care, passion and generosity and the stage crew and technicians treat each play as though it’s a professional production. I was expecting mediocre ‘am dram’ when I first arrived but was pleasantly surprised by the high standard in all departments.

As the first couple of plays came to a close I was chatting with Barrie about photography (my day job) and he suggested that I shot the next production which was in spring 1988, the play was ‘Chapter 2’ which is a comedy by Neil Simon. Barrie was in the play so this would be a good way for me to start by shooting a friendly face (or 4) – the play is about two couples.

The photography was a success and now, 30 years later, I’m still photographing the productions. I feel as welcome now as I did in 1987. People obviously come and go but the Playhouse 2 ethos is still the same as it ever was, friendly, welcoming and with a passion for great theatre.

Another notable aspect of the theatre is its willingness to stage ‘difficult’ plays rather than the ‘bums on seats’ productions expected of similar groups. This pushes actors beyond their comfort zones and ultimately, makes them better performers. It also gives me new photographic challenges.

I wish everyone involved now and in the future all best wishes, so come and get involved with this ‘hidden gem’ which could give any theatre in nearby Oldham, Rochdale and Manchester a run for its money!

I hope to a be a part of this amazing theatre for many years to come.

Thank you Playhouse 2, you’re the best!

Don't forget that a number of local restaurants offer discounts with your ticket for any event.