Trudging Back Up North 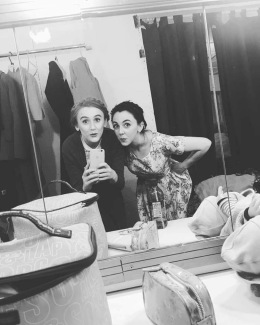 Helen (Left) and Rosemary (Right) getting ready for 'Separate Tables'

Grudgingly trudging back up north with the grim determination to become a professional actor was a plan not endorsed by many. After living in Brighton for six years, my aim to install myself back into my parents' home and wait for inspiration to hit did, I admit, look a little shaky. My family worried I wouldn't be able to find work; friends argued I might lose track of my goals and give up; and more than one person told me that all the acting opportunities were in the south and I was putting myself out of the running entirely. But I'm a dab hand at not listening. And that's how, nearly a year and a half ago now, I found myself back in Diggle. Wondering what to do next.

I knew I wanted to act. I'd known that during all the out-of-hours rehearsals I'd been part of at sixth form; I'd known it when my time at the University of Sussex had been dedicated more to the drama society than my degree; and I'd known it in the years after graduating, when I used to race home from work to rehearse plays I was staging with my friends. What I didn't know was how to get into it. I sat in Diggle and I signed up to casting websites and I joined theatre network groups and I wrote to agents. As I waited for replies, I began to worry about my big plan but then I was put in touch with local am-dram actor Andy Hoyle, and he put me in touch with the people at Playhouse 2, and that's when things started to pick up.

Playhouse 2 cheered me up, introduced me to new friends, and helped rebuild my confidence. Having spent years acting in profit-share productions, (essentially unpaid), and fringe productions, (actually unpaid), I was desperate to finally go professional, and I didn't think amateur dramatics was the best route to aid that. I am so glad I was proven wrong. My first show at the theatre was Terence Rattigan's 'Separate Tables', and I couldn't have asked for a better welcome to the Playhouse. Though my character, Jean, may not have been a cheery woman, rehearsals for playing her were a scream – the talented cast were raucous backstage, which fed into the finished production and gave every performance the added challenge of trying to hide rampant corpsing. Not only did the hilarious cast and crew cheer me up but they helped point out paths I could take next which included being put forward for a production at Saddleworth Players and finding a wonderful singing teacher, whose efforts have – for the first time in my life – got me singing through an entire song and doing it happily.

Playing Pattie in Alan Ayckbourn's 'Seasons Greetings' at the end of last year propelled me even further. This play put me back into Playhouse 2 rehearsals with some familiar faces from 'Separate Tables' and a bunch of other brilliant actors. It led to me playing the wonderful Annelle in Lyceum Theatre Oldham's production of 'Steel Magnolias' by Robert Harling. And, perhaps most significantly, it helped me prepare for my auditions for drama school. I had auditioned for various drama schools in the past, to absolutely no success – in fact, the rejections had left me so discouraged that when applications opened in the autumn before I moved home, I didn't attempt them. But last year, after Playhouse 2's boost had helped set me back on track, I decided to go for them again... using a speech from 'Seasons Greetings'. Pattie's heartbreaking reflection on how she fought for her lazy, drunken bully of a husband seemed perfect for my auditions; and the encouragement and enthusiasm of the cast and crew, (particularly Director Steve Bennett and P.A. Fay Hough), sent me into them with a confidence and excitement that I hadn't felt in years. And it worked. 'Seasons Greetings' ended, I headed straight into rehearsals for 'Steel Magnolias', and a week after that closed in February, I received my acceptance letter from The Oxford School of Drama.

So, in just under a year and a half, I went from sitting alone in my room in Diggle, to preparing to train professionally. Eighteen months of performing with various theatres and film crews has set me firmly back on my feet and I am now on the best path I can take to make acting my career. And it was the ever-welcoming people at Playhouse 2 that helped me do that. Don't get me wrong, I know all too well that I've not "made it" yet. I am currently working my socks off, applying for grants, and crowd-funding, to get together the money I need to pay for the course. But, the people I've met through amateur theatre have helped me keep the positivity and determination I need to do that. Am-dram is made up of actors of all ages, they work different jobs and lead different lives – but when they get into a rehearsal room, they all have the same enthusiasm and excitement for the shows they're putting on. And being around that is a brilliant reminder of what I'm saving for and working towards. I am so very glad I trudged back up north.