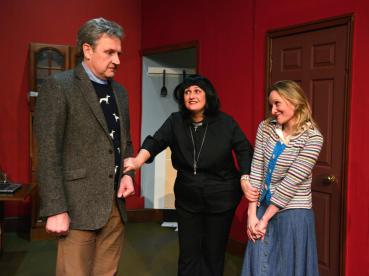 I remember the first time we put on a play based on a popular TV series. Opening night, John Weetman walked onto the apron, looked up at the audience and in a ridiculous French accent uttered that unforgettable line: “For those of you who have been paying attention!” The audience erupted, and we were off.

Why are TV shows so popular with theatre audiences? Well, it’s not because they are well crafted plays that’s for sure. They are written for a completely different medium and consequently can be an absolute nightmare to produce. The thing is TV scripts are written to convey a lot of information in a very short time so one ends up with short scenes sometimes 15 seconds transitioning between say, an exterior shot of a character having a deep conversation with a cow, in a field, in a storm which instantly fades to later that evening in the village hall with the same character and the entire cast assembled for a meeting. If you’re not careful you can easily end up with 30 minutes of play and 70 minutes of blackout, and you still must strike the cow! Solution? I simply have Geraldine walk between the village hall to her vicarage during a cross fade whilst continuing her dialogue. The lighting tells the audience what’s happening, and it adds to the theatre, plus we keep the action moving. Oh, and sack the cow. (Moos Off!)

I think the trick is not to try and recreate the TV show from a technical and visual point of view, instead keep the staging a simple as possible, with The Vicar of Dibley most of the action is in either the village hall or the vicarage. I then keep the downstage area as a generic playing area, Vestry, Field, Barn etc. Next, concentrate on the characters because they are what drive British sitcoms. Sure, they get into lots of situations but it’s how the character reacts to those situations that generates the comedy. Del Boy falling through the hatch in a bar is funny enough but his reaction as he springs back up as if nothing has happened? Absolutely priceless. I ask the cast to try and imagine how their character would react in each situation? Failing that don’t be precious about character development, just watch the episode. At the end of the day our audiences are coming to see The Vicar of Dibley not Hamlet.

Which brings us to casting. When we get it right and every member of the cast nails their part, not just in recreating the look, that’s a bonus, but by catching the manor and sentiment of their characters, that’s when the magic happens. I think we achieved this in The Vicar of Dibley. I don’t think we would have attempted the Second Coming if we could not have assembled the same cast, which apart from Julian who played Frank we have.

It goes without saying (which I nearly did) that the best sitcoms are brilliantly written, and The Vicar of Dibley is no exception. Slick, pacey, economic dialogue, no big monologues, again written for TV where they have many episodes to allow us to get to know the characters, so monologues aren’t needed, or wanted probably. I love this kind of dialogue, it works just as well on stage as on TV.

We love our sitcoms, we fall in love with the characters they create, and it’s a love affair that spans generations. Steptoe and Son, Frank Spencer, Del Boy, Captain Manwaring, and now Geraldine Granger (my favourite if I’m honest). We recite the scenes to each other, we bond over them, they are part of our culture, but why so much? You tell me? No really, come and tell us after the show or drop us a line with your favourite Vicar of Dibley moment. Owen returning the Vicar's tooth perhaps. How Alex and Liz kept their faces straight during that scene I’ll never know. For me? I can’t pin it down to one reason, nostalgia maybe, perhaps I identify with a character or two, the writing? Or maybe as Alice would say, "they are very very very very very funny, no Wombles though, shame".