Andrew Wood, discusses the nuances that can be brought to a character when asked to play a particular role for a second time... 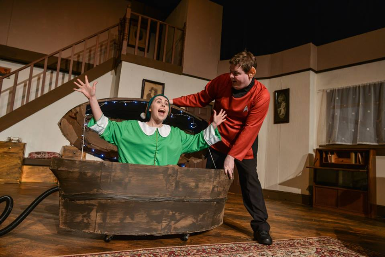 In February, I returned to Shaw’s Playhouse 2 after a hiatus of a number of years to play the role of Clem Pepp in Alan Ayckbourn’s ridiculous farce: Improbable Fiction. This was an interesting first for me, as an actor, as it was the first time I was to reprise a role I had already played. I had last portrayed Clem in Saddleworth Players' production in 2013. (For those of you unfamiliar with the play, the role actually consists of five different characters in different times. The first act sees a group of amateur writers during a brief winter meeting, and the second act has several stories going on at once; all part of this mad narrative being dreamt up in these writers’ minds). From a personal standpoint, there wasn’t much I did differently in ways of characterisation. I used the same accents and body language as I did when I last played them (very much like an old pair of shoes, they were worn, but still fit), but as I already had a good idea of who these characters were, I was able to embellish them. I was able to make Dudley, the evil Victorian nephew, a lot more smarmy and ‘greasy’, as I put it. I could put a more accusatory tone into DCI Rash’s already sharp cockney. This was great fun as an actor, as I could challenge myself to see how far into the realms of the ridiculous I could take these characters, without them becoming annoying, or unbelievable.

But, there were challenges as well. Because I had done the play before, there was a lot of expectation I had on how it should be set, and how the other characters would sound and react. Obviously, with a completely different cast and in a completely different theatre, things were going to change. The set was oriented completely differently to the last production’s and people were dressed differently, moved differently, it was an interesting process to watch. Luckily, the rest of the cast and crew were highly experienced and just fantastic to work with; it was with their help that I was able to fall so neatly back into these characters that I had played three years before.

During the rehearsal period, I noticed that as we started the scenes in the second act, most of the lines were still in my head from the last time I did it. Particularly, in the scenes as DCI Rash. I think that because Rash was my favourite character to play, his scenes and his lines had been etched into my memory, and when I put the trench-coat and fedora on, it just immediately brought that nonsensical no-nonsense Cockney copper out in all its loony glory.

It was so much fun, perhaps more so the second time round, as with the characters and lines just a case of memory from the start. I had more chance to fit in visual gags and other such nonsense to make my performance more honed, character wise, but also more fitting of the zany mad-cap action that is Alan Ayckbourn’s Improbable Fiction.

Don't forget that a number of local restaurants offer discounts with your ticket for any event.