Playhouse 2 pull some classics out of the bag 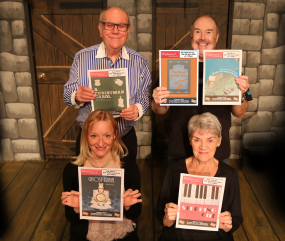 Crompton Stage Society, based at Shaw's hidden gem, Playhouse 2, has revealed their 2019/20 season of plays.

There's something for everyone to enjoy, and, as ever, the production committee have put a great deal of thought into their choices.

The season starts in October with 'The Ghost Train' written by Dad's Army's very own Godfrey, Arnold Ridley – very apt for Halloween.

December will bring the Christmas classic, 'A Christmas Carol' to the stage, but an adapted version by Karen Louise Hebden, which will bring an extra helping of humour to the table.

In the new year the cast and crew that brought you 'Ladies Day' and 'Ladies Down Under' are back with Richard Harris' 'Stepping Out' – a play that has recently been performed in the west end. It's about tap dancing, fun and friendship – what's not to love?

For a taste of Lancashire, look no further than 'The Road to Nab End' by William Woodruff, adapted by Philip Goulding in April. This play chronicles the early life of Woodruff who grew up in Lancashire through the turbulent economic time of the 1920s.

Finally, travel the world with Phileas Fogg as he sets on the adventure of a lifetime in Jules Verne's classic, 'Around the World in 80 Days'. If you liked 'The 39 Steps' a couple of years back, you'll love this fast-paced, comedic version of the original.

"Our audiences were asking for plays to fit the time of year and hopefully we've delivered that this season, particularly with a ghost story for Halloween and a Christmas play at Christmas.

"We can't thank our audiences enough for their ongoing support and we hope we've built a season that has something everyone will enjoy."

To compliment the new season, there's also the Playhouse 2 Studio Productions to enjoy. Clock Tower Theatre Company will be bringing their new show 'Adrift' to the stage on 20 July before they head up to the Edinburgh Fringe. It's about three men who find themselves adrift in the middle of the Atlantic – what could go wrong?

Their show 'Service!' was a major hit when they last visited Playhouse 2, and 'Adrift' promises to be the same.

Then in October, the theatre will see a performance of 'Fly Half', which is a lyrical hymn to one man’s passion for his family, his town and his beloved game of rugby brought to you by some RADA alumni.

For information on how to buy a season ticket, visit www.playhouse2.org/drama/