Fay Hough tells us how the cast and crew of Ladies' Day bonded over a broken gazebo... 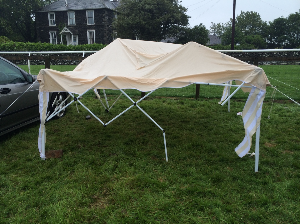 When I signed up to work on the production of Ladies' Day in October 2014, who knew that what would come out of it would not only be a great production but a great group of friends as well. Fast forward eight months and we were all on our way to the actual races at Cartmel. Being somewhere that I go to with my family every year I thought the girls would love it, especially as it was the main theme to Ladies' Day – it couldn't have been more apt. I knew we would have a good time but what was to occur was probably one of the best, funniest and most memorable days of our lives and I'm not over-exaggerating.

Complete with brand new gazebo, enough food to feed the entire racecourse and what we thought were an adequate amount of waterproofs (we were wrong), we all set off and met on time (which is not an easy task for us) at the motorway services en route, with the plan to drive in convoy to the racecourse; the only thing was, we got lost. Not a big deal, but a good indicator of what the day ahead had in store for us. Eventually, after a detour, we arrived at the paddock in what could only be described as a torrential downpour, but instead of holding back like sensible, intelligent people we set out to construct our gazebo...it did not go well.

Our beautiful, cream! gazebo was virtually destroyed in less than five minutes after a gust of wind turned it upside down whilst six of us clung on to it for dear life. But, we are not quitters and we would not be defeated by a broken gazebo; we work backstage at a theatre – there is nothing that can't be fixed! Unfortunately, the wind and rain persisted, but so did we and after flipping it back to the way it looked on the box, in between the hysterics, we set about making it stable(ish). We tied the guide ropes to our cars, socks were used to keep broken (and falling) bits of the metal structure intact and when the wind threatened to blow off our tablecloth jump leads were dug out and attached. It was a sight to be seen! What I can't explain enough though is how wet we were – I mean we looked as if we had jumped into the nearby river fully clothed! Nevertheless, we did it and although only at half its height, we got out our camping chairs and like the seven dwarfs sat proudly under our new home.

Thankfully, the weather changed for the better and off came the soaking wet waterproofs (well one of us was only wearing a plastic poncho and a waterproof jacket, as you can imagine, it does not make!) and out came the sunglasses. After all this, you would think we might have had a bit more luck on the horses – but no. Whilst we didn't go home winners, or with a gazebo, we did go home laughing and I don't think we have stopped since. It brought us even closer as a group and has provided us with memories that will last a lifetime, and what's even better is that we plan to do it all again! We've already bought our tickets and our gazebo – a green one this time, which we have named Gary. It has been suggested that this year we have a barbeque – what could possibly go wrong?