Makeup Artist, Charlotte Jarvis tells us about her recent involvement in turning men into drag queens... 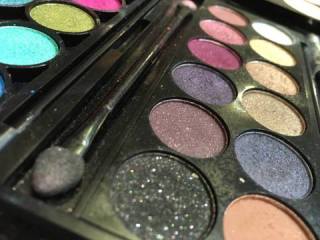 I’ve been asked a few times to come and help with makeup up at Playhouse 2, but when I was asked to help transform men into drag queens in a production of Ladies Down Under, I was very excited! (Particularly as one of them is my mechanic!) There was to be a Mardi Gras section of the show, which involved drag queens, classic disco music, feather boas, dancers and a confetti canon. It sounded fabulous!

I set to work designing the looks on paper first. During this preparation period, I spoke to the props and costume ladies, as it helps to know what the costumes and wigs will be so a look can be tailored with that in mind. It also helps to know a little bit about the character, so I had a quick read through the script to get an idea of what sort of person the individual characters were, and also how much time I would have to get them ready before they were due on stage. In this particular play all three actors who needed to be turned into queens had other parts earlier on, one particular change was so quick I only had time to slick some gloss on his lips while he put a masquerade mask on.

There was a certain element of ‘pre-show prep’ that needed to be done by our actors. They had to make sure that they had shaved their faces and moisturised, this helps the makeup go on much smoother and it makes it much more comfortable for the actor during the application. If the actor has a really dark stubble shadow, it would be necessary to try and cancel that darkness out using colour correcting techniques – either that or extremely thick foundation!

I found the drag make up extremely fun to do as I could be as over the top with the colour and glitter as I wanted (not to mention the giggles we had). To create a larger than life look, I made our actors' eyes look bigger by covering the natural eyebrow and drawing fake ones in higher up the forehead, for consistency and speed I used eyebrow stencils.  The new eyebrows were then covered with several layers of glitter. A tip I picked up, was to use a thick cream makeup called clown white as a base on the eyes. By applying eye shadow over the top of the white, it makes the colours much brighter, which is particularly useful under the lights on the stage. Finally, I applied large, over the top false eyelashes. The actors needed a couple of applications to get used to wearing them - one actor described them as feeling like "I’m looking out under a large brimmed hat".

The final step of the makeup was to apply a bright blush and over draw the lips. One actor joked that the lipstick helped him deliver his lines as it made his lips "slippery" he then descended into a discussion about this being the possible reason why women talk so much, before I nipped it in the bud!

Last job was to get the wigs on and styled to compliment the costumes. It was amazing to see how the actors' whole demeanour changed once the makeup, wigs and costumes were complete. They were pouting and strutting like natural born women!

I had so much fun during the play and although at the end of each night I was covered in glitter and feathers, I always had a smile on my face.