From Makeup To Madness

Playhouse 2's talented makeup artist, Charlotte Jarvis, discusses how makeup isn't the only thing she can turn her hand to... 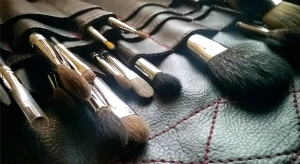 Hello there, I would like to tell you about how I got involved with Playhouse 2 and what this fantastic local theatre means to me. I was invited to be involved in a production at Playhouse 2 in June 2015. One of the actors (Paul Risby) asked me to come along and meet the Director (Barrie Cottam) to see if I could help on a play that was being rehearsed at that time.

The play was A Little Local Difficulty, which was a re-working of Gogol’s classic Russian comedy – The Government Inspector. Now, I have to admit, at the time that really didn’t mean much to me; I had only ever seen big stage show productions such as Starlight Express etc. The amateur circuit had completely passed me by, but intrigued, I jumped at the chance to be involved. I am a part-time freelance makeup artist, and up until this point my experience had been in photo shoots, bridal makeup and the odd bit of filming, and I was keen to add stage makeup to my repertoire.

The play was set in the 1850s, so the makeup I was asked to do was the typical paler than pale faces, plenty of rouge and a few beauty spots thrown in for good measure. During my time on that first play, I was able to see firsthand just how much hard work goes into a production. Everyone pulls together to make sure the stage is set, the lighting and sound is ready, the costumes are on, the props are waiting and the show starts on time. It was my job to arrive early and make sure the actors were ready for the start of the show. It was a cast of 14, so I decided the best way to manage this would be to make up the actors in order of appearance, although more often than not it was a case of whoever was nearest got grabbed and plonked in the chair!

The buzz in the green room backstage just before a performance is exciting; it's a mixture of nerves and energy as we hear the audience filing into the auditorium. Something I learned quite quickly was that everyone just mucks in, no matter what role you have been allocated in the production. It's never a case of "well that’s not my job" or "I’ll find someone to help" because of how fast paced the environment is, if you are the nearest person to hand when something goes wrong, you are the person who fixes it. I found myself getting involved in costume changes, fixing tangled jewellery and tying shoelaces (the actor couldn’t bend down because she was wearing padding under her costume). I even found myself sewing buttons back on a costume at one point. Everyone does what is necessary to ensure that you, our audience, gets to see the show as it should be.

After the run of the play had finished, I was asked if I wanted to get involved in other jobs on the production team. As I had felt like a part of something great, I agreed. In fact, I went on to be involved in four further plays in the very next season, mainly as ‘props’ or as I like to call myself, Props Co-ordinator, a rather grand title I’m sure you will agree, but it makes me feel special (it's the little things, you see).

I’m going to finish with this: Playhouse 2 feels like a family, I have made some lifelong friends (hopefully they know who they are so I don’t have to give them a roll call) and when I’m here, I really wouldn’t want to be anywhere else.