Flying the Flag for Drama

Long-standing Playhouse 2 volunteer and player, Lesley Abbott shares some of her experiences at the theatre... 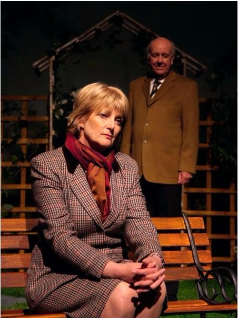 Hi, I'm Lesley and I have been an active member of Crompton Stage Society since 1970. Playhouse 2 has been an enormous part of my life and so I have been asked to write a blog about how it was when I first became involved. Back then I'd only just left school...in 1969 when I was studying for my 'O Levels' at Hulme Grammar, the school secretary was also the secretary for the society; Alice Saxon was her name and she brought me in to play Ophelia in a production of Rosencrantz and Guildenstern are Dead. I was only 16 and remember feeling absolute terror when I watched a rehearsal; these wonderful actors were so professional and I was a complete novice! In the end, my exams took precedence and despite feeling a sense of relief, I vowed I would join as soon as my education finished.

Over the next five years or so I attended many rehearsals, simply watching and learning. The Stage Manager at that time was John Wilson...he virtually lived at the theatre and I learnt a lot from him. Props, prompting, front of house, A.S.M., but mostly sitting watching rehearsals in the auditorium, with the likes of Meg Johnson, Charles Foster, Betty and Roy Erentz, Walter Kay, Ernest Ashton and my favourite person of all, Philip Weetman. Not at all 'starry', he would often come and sit next to me and make me feel one of the team. Back then, you didn't even speak during a rehearsal, the actors may have been disturbed and woe betide if you interrupted their train of thought!

The sets were amazing. I remember we used the revolve often and when Derek Clegg was production designer, he would always bring a mock-up of the set in intricate detail, sometimes we had three sets on that revolve. A Month in the Country, as I recall, had three sets, with the revolve turning at appropriate times, denoting a different set each time. Gardens with real trees and bushes, in bloom even! I don't know how they did it, but it was spectacular. Costumes, again, were amazing, thanks to Edna Bamforth – attention to detail was paramount.

My first role was Melissa in The Other Cinderella in 1971. It was a spoof on the original Cinderella story and Edwina Lomax and I were the ugly sisters who were 'good' and Cinders, Ann Bamforth, was a 'baddie'. Featuring in that production was a certain Mr Barrie Cottam, who came to play a Rat, it was his first play and he must have enjoyed it because he became 'Mr Playhouse 2' and without him we wouldn't be where we are today.

Pantomimes in the '70s were a real highlight and brought in a lot of money. We played for three weeks, including Christmas Eve, Boxing Day and New Year with matinees to boot. I was principal boy and loved every minute. They were hard work, especially as Meg insisted we did previews just like the pros. We had a premiere too, Stephen Sondheim's Company, in 1976. Bringing Sondheim to Shaw was a gamble...I mean we'd only just discovered muesli! How would this American musicals writer work his magic? It played for 10 nights and by the middle of the second week audiences were raving and wanted to book again.

Professional directors sometimes came in...we did a production of Chekov's Three Sisters in 1975 and I played Irena, my first serious part. Brian Dooley was directing it and he took no prisoners. In fact, he made me cry and told me afterwards he did it deliberately to bring a performance out of me. I still shake to this day thinking about him, but I guess it worked!

This theatre holds so many memories and the lovely people who are sadly no longer with us have contributed so much in time, effort and sheer dedication. That is the one thing that has never changed. This place is run completely by volunteers, who give their time and love to keep Playhouse 2 flying the flag for drama. It was, and still is, an inspiring place to be and I am proud to have been a part of it. Long may it continue!