Directing Through The Decades 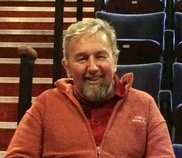 Artistic Director, Barrie Cottam, on his experience of directing.

I've been directing at Playhouse 2 for almost 30 years. The first one was John Godber's Up 'n' Under, in the late 1980s. Everyone remembers the rugby match with the same five actors playing both sides and simply turning their backs to the audience with appropriate logos on their backs to denote which team they were playing. Funny thing is, I had very little to do with 'the game' – my old friend Alan Chadwick, who sadly died a couple of years ago and was a great rugby fan, was entirely responsible, got a credit in the programme but yours truly was credited as Director. We had a wonderful cast too, Steve Bennett (who hadn’t been at Playhouse 2 very long, and is now a director in his own right, responsible for all the Christmas productions of the past 10 years), Greg Sherrington who was such an asset to all the amateur theatres in the area, Eric Walton still performing at Playhouse 2, Biggles and his girlfriend of the time and Pete Curran.

I guess Up 'n' Under was such a departure from Playhouse 2's usual fare at the time but I was lucky enough to be in a position to choose the plays I directed. Others I remember with great affection: Godber's Bouncers, Martin McDonagh's Beauty Queen Of Leenane featuring the debut of Cliff Myatt already, at the age of 17, firing on all cylinders and producing a fire cracker performance.

Fifteen years ago, I directed probably the most ambitious show seen at Playhouse 2, Alan Bennett's The Wind in the Willows. Again, this was with a superb cast: Steve as Toad, Charles Foster as Ratty, Kevin Whalen as Mole, Greg as Chief Weasel, Eric as Badger, Ian Perks in the small but hilarious role as the car salesman-purveyor of vehicules and Pete Fitton superb as the Brummy Horse, plus a very large supporting cast of woodland folk.

The common thread running through all these productions are the backstage crew and every director will tell you the same. At Playhouse 2 we have the best – Andrew Barnes our lighting designer for the past umpteen years, Pete Ludlam and Brian Varley, known collectively as Ludvar Productions, on sound, a team of up to 10 set builders and painters and the ever changing group of props folk, prompts and most importantly Director's PAs and Stage Mangers. The latest production at Playhouse 2, Aykbourn's Improbable Fiction, demanded not only the above but each of the actors required a personal dresser for the extremely quick costume changes in the second half of the show. Could have been a nightmare but thanks to my wonderful PA, Lesley Abbott, and her organisational skills, the whole thing came off beautifully and was a great success.

So to any budding directors I would say get yourself a great play that you like, a group of talented actors you know you can get on with, a backstage crew you can trust, be organised, and be prepared to be on hand to give guidance at any time not just at rehearsals. I'm thinking now that maybe Improbable Fiction will be my last play at Playhouse 2 – the demands of rehearsals and being there during the day helping to build sets and planning gigs leave me exhausted But then again never say never...