Playhouse 2 Patron, Actor and Director, Charles Foster, details the differences between acting and directing and answers the question of which he prefers. 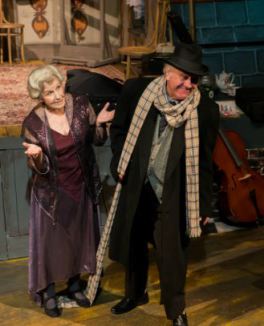 I have often been asked, a few people have wondered, actually, someone once queried (with nothing else to think of at the end of a boring conversation) "Which do you prefer to do, Act or Direct?" The answer, of course, is both. In order to understand we should consider the two roles and what each contributes to the finished product on stage.

The Director is the person in charge, the one who carries the burden of responsibility for any success or failure the performance may accrue. The Director basks in the skills of the actors and technical crew when everything works but carries the burden of failure when nothing goes right and actors are unable to entertain an audience as expected. The Director combines all the skills of various departments together to create a performance without being an expert in any one area. You need to know what you want to achieve and then persuade your colleagues in lighting, sound, scenic design, props, and, of course, acting to use their experience to give you the required results. The Director is the audience looking in on rehearsals and technical meetings and seeing what no-one else can see until the opening night. You need to build a trust with your fellow conspirators so that they have confidence in your directions and vision of the finished article. You have to have the answers ready at all times so that any queries can be answered promptly and without leaving any doubts in the mind of the questioner that you know exactly what you are doing. As a Director, I am most interested in working with actors to create a character and explore the situations which motivate the characters to behave as they do within the play structure. I do believe in allowing the actors as much creative input as possible, it becomes a partnership but with the Director retaining the final decision, should there be a difference of opinion.

Now the Actor, the person who must stand in front of an audience every night and convince them with a performance of truth and integrity to believe in what they are seeing. Acting, by definition, is persuading the audience to suspend reality and join in the journey to the point where make believe becomes the real, where the confines of the stage fall away and everyone involved – audience and players – accept as real what they are doing and seeing. No one can wholly change into another persona, there will always be, in any performance, something of one's own self. The secret of acting is to use personal experiences to heighten traces in the character you are recreating to make the onlookers accept your portrayal of the part; belief is the word! There are so many ways, "tricks" some would call them, to bolster a character. Changing the voice patterns, adopting an accent, wearing wigs and facial hair, costume, altering posture and habitual mannerisms, these things come about through experience and the actor can use them all.

"Which do I prefer, acting or directing?" My answer would be BOTH, the more the merrier. I started acting aged eight at primary school and directing when I was about 50. I find it equally frustrating and totally rewarding. And as long as I have breath I will continue to enjoy and participate until I can no longer stand up or remember how to. Involvement in theatre has brought me infinite pleasure, a treasure store of memories, amazing friendships and a whole career, which turned my life around, who could possibly ask for more?!