A Chat with the Chairman

Chairman of Playhouse 2, Barbara Micklethwaite, sits down with us and tells us how, for her, it all began…

When did you first become involved at Playhouse 2?

It's at least 20 years ago and I saw an article in the Oldham Chronicle that Playhouse 2 were looking for volunteers, and as I was already involved with a small drama group I decided that it would be something I might like to do. So, I came along and, whilst people that know me will probably think this is a strange thing for me to say, I was a bit scared because I was coming on my own and knew nobody connected to the theatre. I came not knowing what I was going to get involved with; I suppose I thought that someday I might get the opportunity to appear onstage, but I think once I got here and recognised the quality of the plays and the people in them I thought it would maybe be a while before I got a part. So, I started by doing a lot of backstage work and front of house. The first play I did props for, the person working with me fell ill, so it was a baptism of fire that week because it was too late to draft someone else in and I did that week on my own. The next time I was asked to do props, I met Muriel [Dagger], who has since become a close friend, and we used to do at least two plays a season from then on.

When and how did you become Chairman?

It's a funny story really, as I was never asked to be on the Management Committee, I just came to an AGM about 15 years ago, when Charles [Foster] announced he no longer wanted to be Chairman and so he just said, out of the blue “I propose Barbara”, at which I was taken aback. I was surprised because I didn't feel I had been involved long enough to be Chairman but I suppose, because I was Chairman of three other organisations at the time, maybe they felt I was qualified for the role. At that point, whilst we had a very hard-working committee, it was made up of people who had been on the committee for a while and were ready to take a step back. So, over a period of years, we just sort of developed the committee that we have now, which has got a good age range and we all bring different talents, qualities and skills. We are very democratic, we discuss things well and, although sometimes we disagree, it all works out in the end and we all get on extremely well. It has been really good to develop a sense of camaraderie between the committee members and they all give me some stick sometimes. I do like to think that I've been a hands on Chairman – I've never been a person who sits back and tells people what to do, and if I do tell someone what to do, it'll be something I will happily do myself. I never thought I would get as involved as I have done and it has been a pleasure.

You also act and do backstage work – do you have a favourite working role?

I enjoy both acting and working backstage. I believe that those who we give the opportunity to be onstage should also be willing to work backstage and put something back into the theatre. If it wasn't for the people who are here constantly working, the theatre wouldn't be here for people to perform. It took me forever to get a part, and in my first role I think I only had one line to read but I was absolutely terrified of not saying that line. I knew the quality and when I came to watch plays I had never heard anyone be prompted, so I would have been mortified if I'd have needed a prompt for one line…in fact I probably wouldn't have come back! I love doing props and I love that a friendship with Muriel has come out of that, especially as we worked so well together, which I think is extremely important and that there is nobody particularly in charge. We work together as a team. Other than props, I've been the PA, Stage Manager, worked Front of House and just been generally involved. I haven't done a lot of plays but the ones I have done I've enjoyed and I've progressed from having one line to a couple of lead parts – I'm very thankful for every part I've been offered.

What’s your favourite play that you have been involved with so far? And why?

My favourite would have to be Ladies' Day. I loved the storyline – I first saw it at the Coliseum and I knew straight away that I wanted to play the character of Pearl. I came back to the production committee and said that we should do it, but only if I could play Pearl (not blackmail of course!). I'd worked with Catherine [Sharp] and Clare [Bennett] before, but not Rachael [Mayor]; nevertheless, I felt that we all gelled so well, including the backstage crew, that it was such a pleasure to come to rehearsals and just be a part of it. I actually felt as though it was real, it didn't feel as though we were acting; it felt as though we really were a group of women who worked and socialised together and as a result of that I've made some wonderful friends and we now have our own little social group going, which is great. I'm really looking forward to doing Ladies Down Under.

You are also a member of the production committee, is it enjoyable to see the construction of a season?

Until I became part of the production committee plays just seemed to happen; I hadn't realised just how much work goes into selecting a season's plays and casting them. It made me realise the difficulties the production committee have experienced over the years. You try and fit the person to the part and I think we do that extremely well here. Dad's Army was a prime example of this – you literally could have been watching an episode of Dad's Army and even if the person didn't initially look like the character we moulded them into them looking the part. I initially went on the production committee in an admin capacity in order to send scripts out and get in contact with people for parts. At first, I didn't feel experienced enough to offer an opinion on the plays we selected, but now, further down the line, I offer suggestions, specifically on casting. I find being on the production committee very interesting but problems can occur when plays are withdrawn at the last minute because, for example, they are going on the professional circuit, or you'll cast a play and somebody pulls out, so you have to be prepared up until the last minute. Each member of the production committee brings different things and they each want different things from a season, and as a result I think we get a diverse season, or at least we try to. I think people would be shocked at what goes on in the background here, and at other similar organisations, and the level of commitment from the volunteers in every aspect of running the theatre.

What are the best things about being involved at Playhouse 2?

Everything. It has been wonderful to see it progress from what it was when I first came, which was great, to what it has become now with events other than plays such as the gigs and the cinema. I think you always have to look at ways to progress – you can't stand still, you have to move forward. We are going to make mistakes because we are not perfect, but what is great is that we have a fantastic band of volunteers – we all get on, we can have our differences but we never fall out, we all support each other and we all have a common denominator: Playhouse 2. 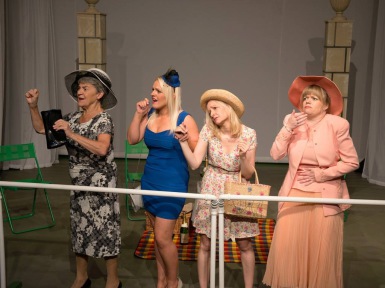